Minimizing air movement in and out of a house is key to building an energy-efficient home. Controlling air leakage is also critical to moisture control.

Below are some general techniques for air sealing that are used in house construction.

Air barriers are used to block the random movement of air through a building’s cavities. This results in reduced air leakage throughout, which can reduce a home’s heating and cooling costs by as much as 30%. Although they are used to stop air movement, air barriers are not the same thing as vapor barriers. The placement of each of these barriers within a structure is climate-dependent, therefore it’s advisable to work with building professionals in your area who are familiar with energy-efficient construction for your specific climate zone.

Materials used as structural and finish components in a house also act as air barriers. By sealing the holes and seams between sheets of drywall, sheathing, and subflooring with something such as durable caulking, gaskets, tape, and/or foam sealants a builder or homeowner can further reduce the unwanted flow of air into and out of the house. Some types of insulation, when densely packed into cavities and crevices, can also aid in reducing airflow.

The most common air barrier used in house construction is house wrap. House wrap, as the name implies, is wrapped around the exterior of a house during the construction process. The material used is a fibrous spun polyolefin plastic that has been matted into sheets and then rolled up for shipping purposes. House wraps sometimes have additional materials woven into them or bonded to them which are intended to help resist tearing. Sealing the joints in the house wrap with tape can improve the performance of the wrap by about 20%. Special tape for this purpose is available from all wrap manufacturers.

The ADA approach involves sealing seams, joints, and openings in the building envelope during the construction process, which can be disruptive to the process. With SCS, the seams and gaps are sealed after the exterior sheathing and drywall have been installed and finished. This is less disruptive, however, SCS is not as comprehensive as ADA, and can result in some critical points of sealing being missed. This is because some areas become inaccessible after the drywall is installed. Tests have demonstrated similar energy savings between houses built with each method.

Have a question? Give us a call. 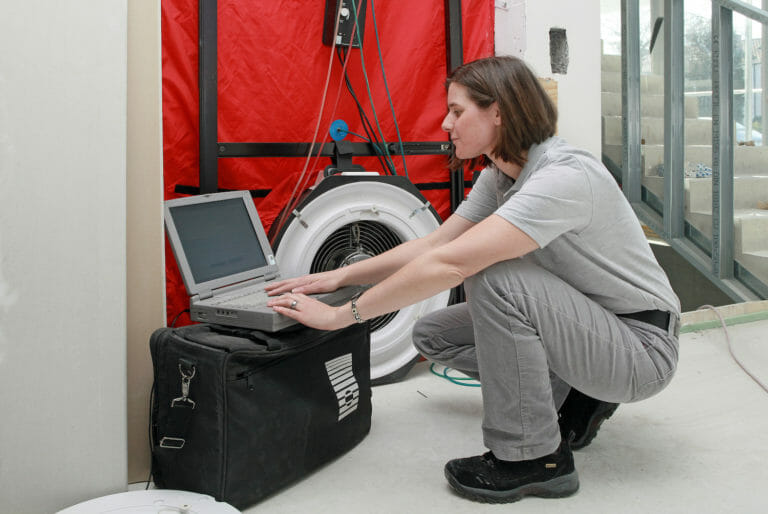 Every home has air leaks, but the cumulative total leakage can vary widely based on whether air sealing efforts have been made. To measure the amount of leakage in a home a tool called a blower door is used.

Air leakage in a house can cause uncomfortable drafts, but beyond that, energy researchers have discovered that sealing air leaks in a home is one of the simplest and least expensive ways to save energy.

Where do you need service?